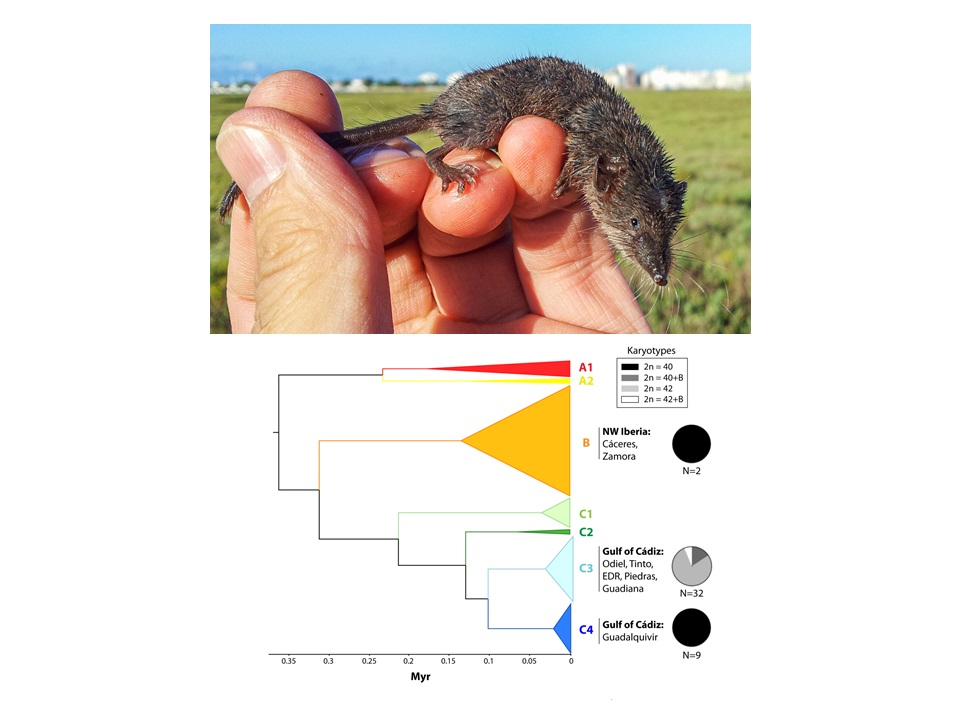 The genus Crocidura represents a remarkable model for the study of chromosome evolution. This is the case of the lesser white-toothed shrew (Crocidura suaveolens), a representative of the Palearctic group. Although continuously distributed from Siberia to Central Europe, C. suaveolens is a rare, habitat-specialist species in the southwesternmost limit of its distributional range, in the Gulf of Cádiz (Iberian Peninsula). In this area, C. suaveolens is restricted to genetically isolated populations associated to the tidal marches of five rivers (Guadiana, Piedras, Odiel, Tinto and Guadalquivir). This particular distributional range provides a unique opportunity to investigate whether genetic differentiation and habitat specialization was accompanied by chromosomal variation. In this context, the main objective of this study was to determinate the chromosomal characteristics of the habitat-specialist C. suaveolens in Southwestern Iberia, as a way to understand the evolutionary history of this species in the Iberian Peninsula. A total of 41 individuals from six different populations across the Gulf of Cádiz were collected and cytogenetically characterized. We detected four different karyotypes, with diploid numbers (2n) ranging from 2n = 40 to 2n = 43. Two of them (2n = 41 and 2n = 43) were characterized by the presence of B-chromosomes. The analysis of karyotype distribution across lineages and populations revealed an association between mtDNA population divergence and chromosomal differentiation. C. suaveolens populations in the Gulf of Cádiz provide a rare example of true karyotypic polymorphism potentially associated to genetic isolation and habitat specialization in which to investigate the evolutionary significance of chromosomal variation in mammals and their contribution to phenotypic and ecological divergence.