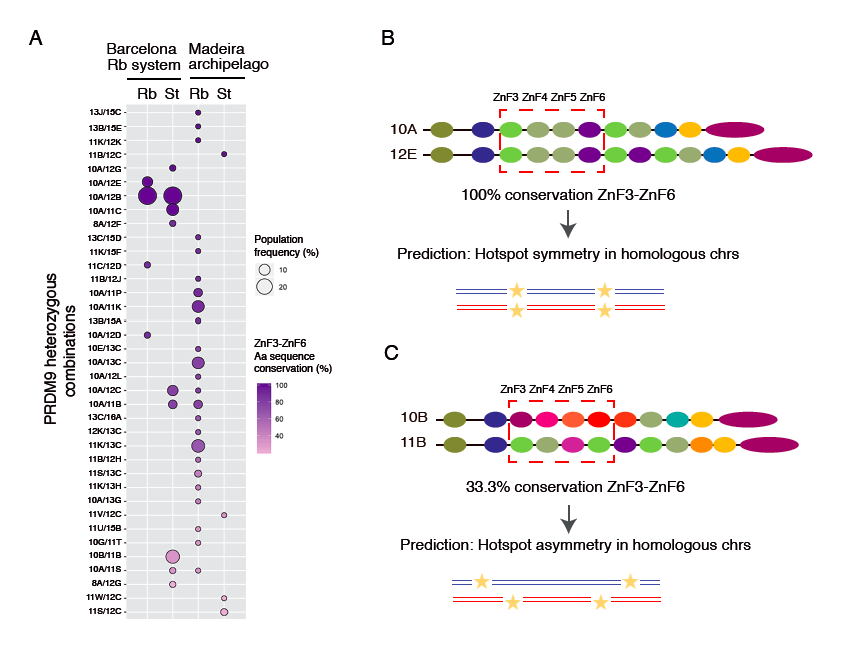 One of the major challenges in evolutionary biology is the identification of the genetic basis of postzygotic reproductive isolation. Given its pivotal role in this process, here we explore the drivers that may account for the evolutionary dynamics of the PRDM9 gene between continental and island systems of chromosomal variation in house mice. Using a dataset of nearly 400 wild-caught mice of Robertsonian systems we identify the extent of PRDM9 diversity in natural house mouse populations, determine the phylogeography of PRDM9 at a local and global scale based on a new measure of pairwise genetic divergence, and analyze selective constraints. We find 57 newly described PRDM9 variants, this diversity being especially high on Madeira Island, a result that is contrary to the expectations of reduced variation for island populations. Our analysis suggest that the PRDM9 allelic variability observed in Madeira mice might be influenced by the presence of distinct chromosomal fusions resulting from a complex pattern of introgression or multiple colonization events onto the island. Importantly, we detect a significant reduction in the proportion of PRDM9 heterozygotes in Robertsonian mice, which showed a high degree of similarity in the amino acids responsible for protein-DNA binding. Our results suggest that despite the rapid evolution of PRDM9 and the variability detected in natural populations, functional constraints could facilitate the accumulation of allelic combinations that maintain recombination hotspot symmetry. We anticipate that our study will provide the basis for examining the role of different PRDM9 genetic backgrounds in reproductive isolation in natural populations.