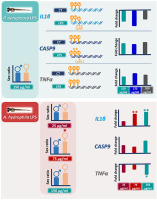 Infections are able to trigger epigenetic modifications; however, epigenetic-mediating infections in the immune system in fish is currently unavailable. Within this purpose, zebrafish were immune-stimulated with three lipopolysaccharides (LPS) during sex differentiation. Methylation patterns of three immune genes were studied by a candidate gene approach together with gene expression analysis, and in adulthood, sex ratios were determined. It was shown that the entrance of LPS was through the gills and accumulated in the pronephros. Significant hypomethylation levels of CASP9 and a significant CpG site for IL1β after Pseudomonas aeruginosa LPS exposure were found. No methylation difference was observed for TNFα. Gene expression and correlation data differed among studied genes. Sex ratios showed a feminization in dose and LPS strain-dependent manner. Here, it is provided epigenetic regulatory mechanisms derived by innate response and the first evidence of possible epigenetic interactions between the immune and reproductive systems.