An inorganic sandwich molecule, Na[Co(C2B9H11)2], able to produce vesicles through self‐assembly and known to produce strong dihydrogen‐bond interactions with amine groups is capable of interacting with proteins. This dual non‐bonding ability of Na[Co(C2B9H11)2] is what makes this molecule unique: it can be firmly anchored to a protein surface and is capable of extending over it. To prove this, the widely available bovine serum albumin (BSA), which has many pendant amino groups in its structure, has been taken as the model protein. It has been found that around 100 molecules of Na[Co(C2B9H11)2] preserve the native structure of BSA, while endorsing it with a significantly increased stability with respect to chemical‐ and thermal‐induced denaturation due to efficient encapsulation. The advantages of this encapsulation technique are two‐fold; the first is its simplicity as it relies on the anchoring 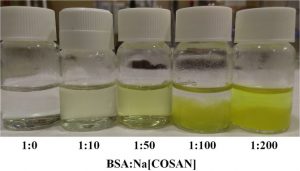 capacity of Na[Co(C2B9H11)2] to the surface of the protein through the amine‐containing residues and the second is its self‐assembling capacity allowing it to spread across the surface. The dense shield of protection offered by Na[Co(C2B9H11)2] has been demonstrated by the inhibition of BSA pseudo‐esterase activity, which indicates that the inorganic corset around BSA protects its reactive surface residues, thereby preventing their acetylation.