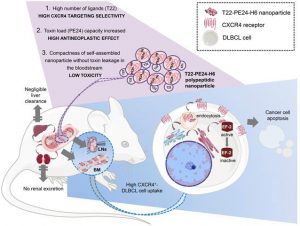 Background: Novel therapeutic strategies are urgently needed to reduce relapse rates and enhance survival in Diffuse Large B-Cell Lymphoma (DLBCL) patients. CXCR4-overexpressing cancer cells are good targets for therapy because of their association with dissemination and relapse in R-CHOP treated DLBCL patients. Immunotoxins that incorporate bacterial toxins are potentially effective in treating haematological neoplasias, but show a narrow therapeutic index due to the induction of severe side effects. Therefore, when considering the delivery of these toxins as cancer therapeutics, there is a need not only to increase their uptake in the target cancer cells, and their stability in blood, but also to reduce their systemic toxicity. We have developed a therapeutic nanostructured protein T22-PE24-H6 that incorporates exotoxin A from Pseudomonas aeruginosa, which selectively targets lymphoma cells because of its specific interaction with a highly overexpressed CXCR4 receptor (CXCR4+) in DLBCL.