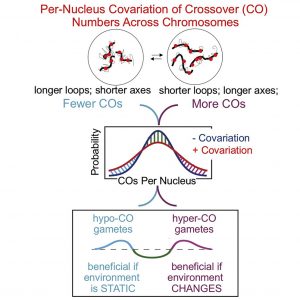 Crossing over is a nearly universal feature of sexual reproduction. Here, analysis of crossover numbers on a per-chromosome and per-nucleus basis reveals a fundamental, evolutionarily conserved feature of meiosis: within individual nuclei, crossover frequencies covary across different chromosomes. This effect results from per-nucleus covariation of chromosome axis lengths. Crossovers can promote evolutionary adaptation. However, the benefit of creating favorable new allelic combinations must outweigh the cost of disrupting existing favorable combinations. Covariation concomitantly increases the frequencies of gametes with especially high, or especially low numbers of crossovers, and thus might concomitantly enhance the benefits of crossing over while reducing its costs. A four-locus population genetic model suggests that such an effect can pertain in situations where the environment fluctuates: hyper-crossover gametes are advantageous when the environment changes while hypo-crossover gametes are advantageous in periods of environmental stasis. These findings reveal a new feature of the basic meiotic program and suggest a possible adaptive advantage.