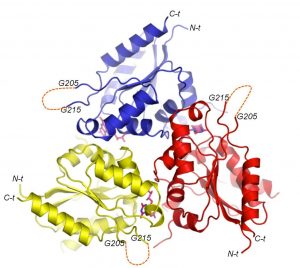 Ppz Ser/Thr protein phosphatases are found only in fungi and have been proposed as potential antifungal targets. In this work, Zhang and coworkers investigate the structure and function of the Ppz1 protein phosphatase (CnPpz1) from the pathogenic fungus Cryptococcus neoformans, and of two putative Ppz1 regulators (CnHal3a and CnHal3b). They found that CnPpz1 is relatively alike to Ppz1 phosphatases from other fungi, but that is not involved in virulence. CnHal3a and CnHal3b display a function in CoA biosynthesis but none of them regulate CnPpz1 and, therefore, in contrast to S. cerevisiae and C. albicans, these are not moonlighting proteins. Remarkably, CnHal3b, whose 3D structure has been solved in this work, is important for virulence in C. neoformans. These findings might provide a novel therapeutic target for developing antifungal drugs.