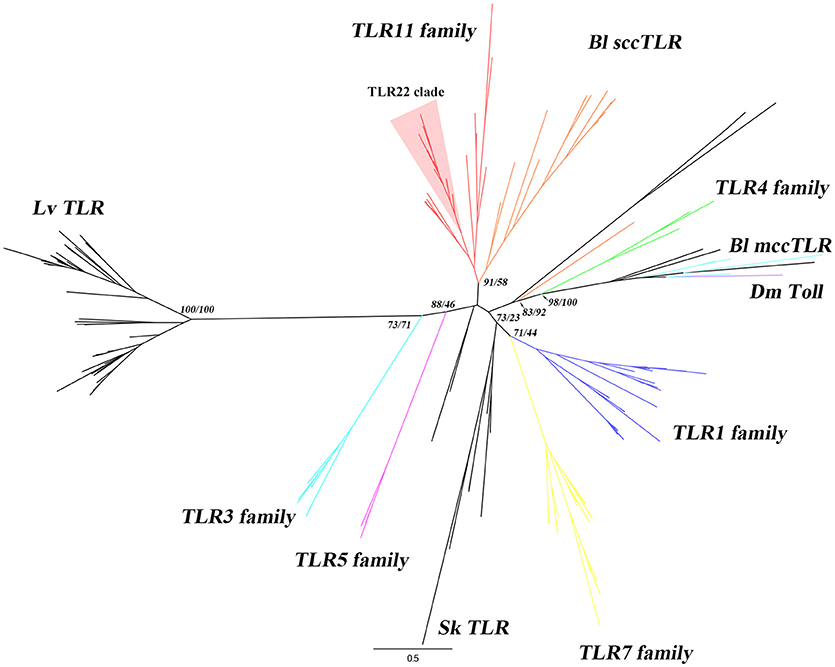 Toll-like receptors (TLRs) are important for raising innate immune responses in both invertebrates and vertebrates. Amphioxus belongs to an ancient chordate lineage which shares key features with vertebrates. The genomic research on TLR genes in Branchiostoma floridae and Branchiostoma belcheri reveals the expansion of TLRs in amphioxus. However, the repertoire of TLRs in Branchiostoma lanceolatum has not been studied and the functionality of amphioxus TLRs has not been reported. We have identified from transcriptomic data 30 new putative TLRs in B. lanceolatum and all of them are transcribed in adult amphioxus. Phylogenetic analysis showed that the repertoire of TLRs consists of both non-vertebrate and vertebrate-like TLRs. It also indicated a lineage-specific expansion in orthologous clusters of the vertebrate TLR11 family. We did not detect any representatives of the vertebrate TLR1, TLR3, TLR4, TLR5 and TLR7 families. To gain insight into these TLRs, we studied in depth a particular TLR highly similar to a B. belcheri gene annotated as bbtTLR1. The phylogenetic analysis of this novel BlTLR showed that it clusters with the vertebrate TLR11 family and it might be more related to TLR13 subfamily according to similar domain architecture. Transient and stable expression in HEK293 cells showed that the BlTLR localizes on the plasma membrane, but it did not respond to the most common mammalian TLR ligands. However, when the ectodomain of BlTLR is fused to the TIR domain of human TLR2, the chimeric protein could indeed induce NF-κB transactivation in response to the viral ligand Poly I:C, also indicating that in amphioxus, specific accessory proteins are needed for downstream activation. Based on the phylogenetic, subcellular localization and functional analysis, we propose that the novel BlTLR might be classified as an antiviral receptor sharing at least partly the functions performed by vertebrate TLR22. TLR22 is thought to be viral teleost-specific TLR but here we demonstrate that teleosts and amphioxus TLR22-like probably shared a common ancestor. Additional functional studies with other lancelet TLR genes will enrich our understanding of the immune response in amphioxus and will provide a unique perspective on the evolution of the immune system.